“In all of my travels, I’ve never beheld a panorama of such heroic beauty,  as that offered to me at the top of the hill of the cappucins……. it is truly a paradise on earth! a timeless solitude dominates both the nearby mountains, and the villages of the Sabines, where the descendants of  ancient families still dwell, solidly  preserving the customs and ways of the past”

( This is how Gregorovius the German historian, describes his first sight of Casperia in his famous book ‘ Wandering in Italy in 1862’ )

150 years later, the visitor can still enjoy the same sensations, on approaching, Casperia, a 1000 year old village, perched on a rocky outcrop and bound by the remains of the original stone walls and towers. one of the less discovered beautiful villages of the Sabine Hills area, just an hour from Rome but a world away. 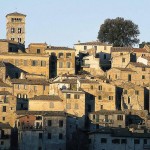 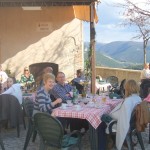 Casperia in the piazza 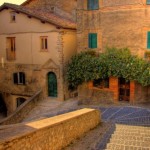 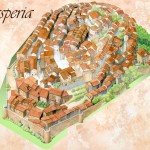 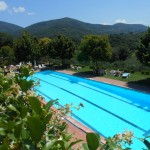 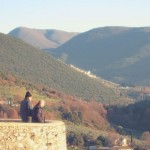 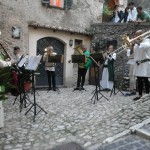 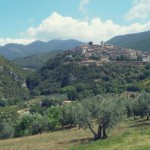 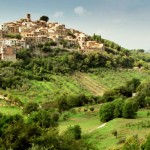 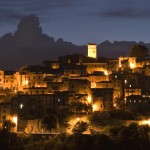 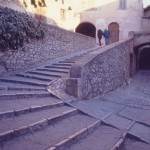 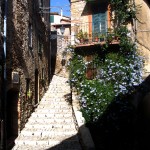 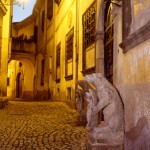 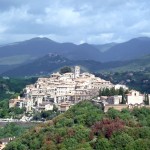 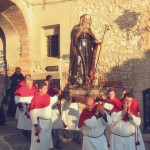 The village is at a height of 400 meters above sea level, and is an extraordinary example of medieval architecture, the fact, that it is completely pedestrian is an added charm but,  maybe not  suitable for everybody.

Casperia has a school ,a post office,   a yoga retreat, two retaurants a wine bar, a supermarket, a hardware shop, and recently several artists and artisans have opened small  shops with beautiful , jewelry. designer clothes,  paintings and local crafts and products.

The small village of Casperia has two  imposing churches, the lower 17th century church, houses a  magnificent Annunciation by the renowned artist Sassoferrato, and the upper church with a bell tower from the 13th century attracts visitors to  admire the artisan made presepe which is a miniature  model of the village. The pride of Casperia however is the  medieval village meets modern life, at the atelier Massoli where top fashion designer clothes have been created for more than 40 years for the international catwalks and recently the maison FENDI inaugurated an accademy, located  in the historical centre, where young people have the chance to train as high quality artisans in the fashion world.